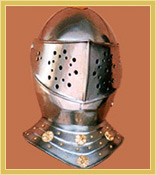 Helmets are considered as one of the most universal forms of armor. Offering a defensive covering for the head, helmets protect the head, face and sometimes the neck of the warrior from the cutting blows of swords, spears, arrows and other weapons.

The basic type of warrior helmets are:

The Burgonet : a light weight, open-faced helmet developed in Burgundy was 16th century Europe. It was used by the cavalry as a substitute to heavy closed helms. They have a peaked brow, combed skull, and hinged ear pieces. Some had a panache or a plume holder.

Visored Helmet : it was a steel helmet that covered entire head. The opening in the front had a visor that could be raised or lowered. This gave a limited visibility.

Coif : it was a hood of chain mail. It had a ventail neck cover, usually worn under a helmet as a further buffer against blows.

The Morion : it was an open of the mid 16th century and was worn by a foot warrior. It had a wide brim and a comb. It was popular because it was cheap and affordable and the design could be altered.