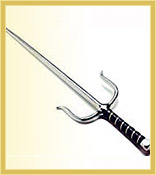 Swords were a major weapon of war during the ancient and medieval history. They are also called the gentleman of all weapons. They were bladed weapons that had two parts namely the blade and the handle or the hilt. They were sharpened blades that could be single edged or double edged. The width varried with the culture and era and so did the type of hilt. They could be one handed or double as per the weight and maneuver of the sword.

The warriors and the knights relied on sword a lot. They were brisk, agile, graceful and flexible. Some were very elaborately decorated.

The bamboo stick katanas were evolved when the samurais were not allowed to carry actual swords. These were also weapons of defence.

Wooden Swords :
They are the swords of self defense. They can be of bamboo or cane. They are used frequently by the martial artists and sword trainers.

Cane sword was developed for the elderly for self defence. It could be used as a walking stick and a weapon.

The trainers use wooden swords of different models to train the fencers. When beautifully crafted, they can be good decoratives.

Antique Swords :
They are the collectors products. The ancient swords have a historical significance and a mysticism attached to them. The blades were made of a hard metal, steel or bronze. The hilt could be wood, leather, ivory or bone. the most common was wood covered with leather or metal wire.

They are not used as weapons anymore but are collector's pride. They decorate homes and offices. They have always been used as a decorative, a symbol of power and aristocracy.

Chinese Swords :
They originated in China by thes mythical San Huang emperors. Dao is considered the first single edged sword that was made by melting gold. The swords were given names. There could be male and female swords.

Ming Sword was from the Ming Dynasty (1368-1644 AD) which ruled China for almost three centuries. This compact swords were beautifully handcrafted with a ridged central fuller for stiffness required in thrusting and lightness required for speed.

Tai Chi Sword are built for the martial artists. The Damascus Tai Chi sword was built from a hand-forged Damascus steel blade to produce a fast and balanced sword.

Kungfu Sword is also called the Dao. The sword has distal-tapered blade and a hand-tied grip. These swords were kept in brass-mounted real wood scabbard.

Gladius Swords :
The Roman Swords were called Gladius. They were initially meant to be stabbing weapons. Latter they were developed into cut and thrust weapons. They had a with a long point and "waisted" blade. They were one-handed, has a light blade with a wooden guard and pommel.

The Pompeii Gladius was the Imperial Roman short sword. It was named so for it was found in the ruins of Pompeii (dating back to 79 CE). The grip was natural bone and complete with an oval guard and flattened spherical pommels.

Samurai Swords :
The Samurais were the privileged people of Japan. They could wear two swords (daisho). They had been given special rights to use the sword to their discretion. Out of the two swords they wore, one was long called the Saito Katana. Its blade was more than 24" long. The short sword (shoto-wakizashi) was between 12 and 24 inches.

Bamboo stick Katana was a special Samurai swordthat were developed when the samurais were not allowed to carry the actual swords in 1867. They were held in crafted bamboo sheath and had a carved grip. They were also used in martial arts.

Falchion Swords :
A falchion was a household tool adaptation for wars. It appeared to be more like a meat cleaver. It was used against the lighter armors by the infantry and the knights alike. It was a Renaissance sword. It had a wide heavy blade with point of balance towards the tip. It could inflict heavy blows.

They were mostly single edged with rounded tips. The later Italian versions were more slender.

Flamberge Swords :
These were modified rapier swords. The shape of the blade had a zigzag shape resembling flame. They were supposed to look more fierce and deadly and fashionable at the same time. The effectiveness was same as that of the one with smooth blade but was said to inflict a deadlier wound.

It was favoured by the high officials and the upper class. It slowed down the opponents sword as it created a vibration in his sword due to zigzag shape. The flamberge with a dish-hilt were called flammards" or flambards.

Rapier Swords :
The Rapier was a favored Sword in the 16th and the 17th century used mostly as a dueling weapon. It was a modification of cut and Thrust sword. It was more fierce than a regular sporting sword. It had a slender blade more suited for civilian use. It gradually developed into an edgeless thrusting weapon. The point of balance was towards the hilt thus making the movements swift.

They could only lacerate the opponent and rarely kill. It was more of a self-defense weapon. A rapier was a tip-based thrusting sword that used stab and pierce and not slash. The shape of the blade could be flat triangular to thicker, narrow hexagonal one. The shape of the hilt could vary to personal choice.

The efforts were made to combine the rapier with the military cutting blades . these modifications came to be called rapier sword. The result however was that the new blade could not perform well. Flamberge was a rapier with a flame shaped blade used by the high officials.

Claymore Swords :
It was the traditional Scottish sword. It was evolved from the Scottish broadsword. It had downsloping quillions instead of the crossguard in other swords of the era. It was called claidheamh mor in Gaelic. It was a straight sword used for cutting and thrusting. The blade was heavy and so was the pommel. It was a two-handed sword.

The cutting force was increased by the use of two hands. Its point was used for thrusting when need be. The weapon was more effective in close combats. The sword was accompanied by a dirk.